Migrating your website to Drupal 9 - A Necessity or Luxury 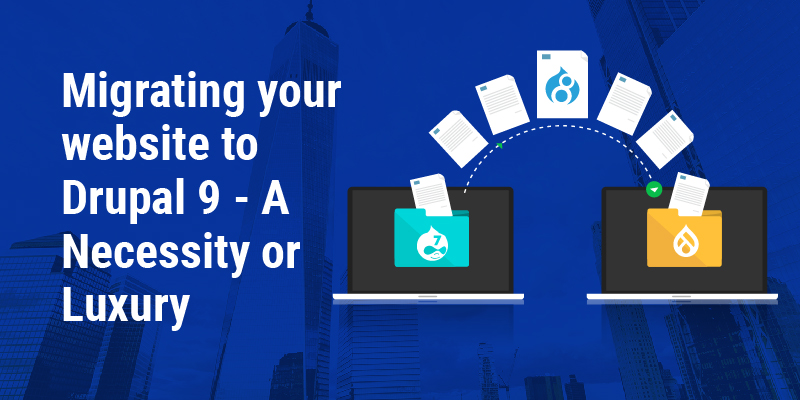 There is a dire need to migrate from the lower Drupal version to the latest Drupal 9, and it is not for a luxury purpose wherein it's a necessity. Many websites are still clinging to the older Drupal versions fearing the upgrade process and its complexities. According to W3Techs, more than 62% of sites are powered by Drupal 7, 28% by Drupal 8, 4% by Drupal 6, and 4% by Drupal 9. It is the most suitable time to move to the latest version without any second thoughts; we let you know why in this blog post as we dive deep into migration essentials. Continue reading...

Upgrading from Drupal 8 to Drupal 9.0 is an effortless and more smooth process. Migrating to Drupal 8 is the best option for many lower versions, even though Drupal 9 is now out. It does not involve the cumbersome re-platforming effort that the older Drupal migrations used to entail. Therefore, you can now migrate the Drupal 6/7 to Drupal 8 and the more straightforward Drupal 8 to Drupal 9 upgrade later.

A lot of websites rely on free migration planning tools available online. But, it is ideal to speak with the experts to sort out the path that effectively migrates your website without any blemishes. At Drupal Partners, our project managers or technical architects plan migrations and put them down on an excel file for everyone to see. Besides them, developers performing the migration use spreadsheets to keep all details related to the progress updated.

Content migration is automatic as the core comes with the capability. When the website adheres to the core and common contributed content types and fields, just go with the automatic migrations. But, if the site depends on custom code or contributed modules, an automated migration is impossible; go for the custom migration approach.

Drupal 7 is powered by PHP - a much older version; therefore, a minimum of 7.2 is essential to support the migration. Also, check with the several other platform requirements to investigate and implement.

Check Out: Our Migration Page for Insight

Drupal 8's codebase has undergone features and improvements; traditional paths and functions are deprecated within the code. This enables development teams with backward compatibility, during which they can see alerts that code is deprecated. This deprecation model supports the Drupal 9 upgrade more like a minor version release for Drupal 8 than a significant re-platforming effort.

Taking The Big Leap To Drupal 9

It is feasible to skip Drupal 8 and take the big leap from Drupal 7 to Drupal 9. In simple terms, the Drupal 7 migration ecosystem is compatible with Drupal 9. Drupal 9 includes the identical migrate_drupal module to migrate to Drupal 8.

Drupal 9 is the future for Drupal websites unless you are planning to choose a different platform. Continuing with end-of-life software is not even close to recommending for website owners. There lies a definite necessity to move up the migration process. With 11+ years of Drupal experience, 30+ Drupal certified experts, and a whole lot of Drupal migrations expertise, we can walk you through the stairs effortlessly.

Talk to us, and we would gladly assist you with your Drupal Migration. Click here to fix an appointment with us!

January 12, 2022
Top 12 Key Indicators Why Google Isn't Indexing Your Website
December 15, 2021
How To Hire A Great Drupal Developer - A Step By Step Guide