What new features to expect from Drupal 10 and how to be ready to receive the new version? 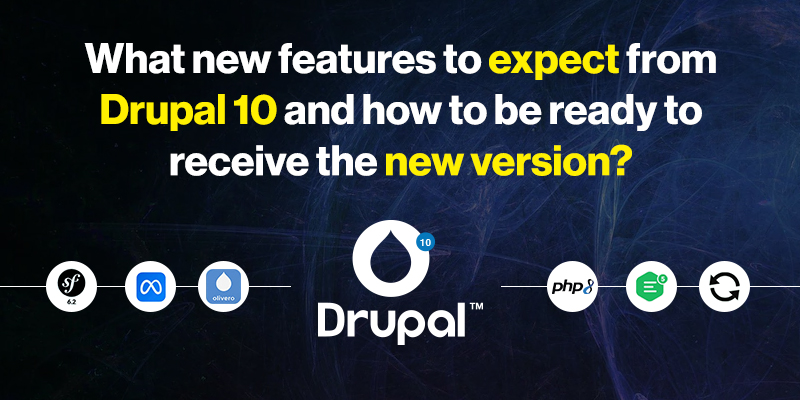 The 10th version of Drupal is coming out soon, and we wanted to provide our readers with a closer look at what the new system has in store. Regular updates and development are part of the natural cycle for any software, and this includes newer versions being created.

The newest and most recent version of Drupal is 9.3.x, which was released on June 3rd, 2020. There weren't any changes that could be considered earth-shattering or game-changing in comparison to the older versions. The primary changes were: replacing the old version of Symfony with the newer 4, renewing the Twig theme engine, and deleting all outdated code. Although Drupal 9 and 8 might not have many visible differences, Version 9 was released with much more compatibility in mind.

Version 10 is getting released in the latter half of 2022. Our estimated release date is November 2023, pending the end of support for Symfony 4 and CKEditor 4. In other words, there will be no more security updates or fixes for any existing problems. Drupal runs on the Symfony framework, and its code is largely based on it. If Drupal 9 wants to update to a newer version of Symfony, quite a bit of core and module work would be necessary. A more reasonable next step would be to create a new, compatible version of Drupal that adheres to the standards of Symfony's latest release while also incorporating innovative solutions and ideas—without having to concern ourselves with backward compatibility.

Drupal is an open-source project that anyone can contribute. If you join the Drupal community, you can take part in developing and releasing new versions, like Drupal 10. The version is currently in development but with help from people like you, we hope to release a stable version soon.

You can help by checking out the #d10readiness channel on Drupal's official Slack. You can also find a list of bug reports and ideas for development versions, so you know what developers are currently focusing on. Anyone in the Drupal community can contribute by reporting or resolving issues. The goal is to release Drupal 10 in 2022!

Drupal 10 will introduce us to numerous new features, as was the case when we transitioned from Drupal 8 to 9. The most significant change that starts the development of Drupal 10 is the new version of Symfony: 5.4. Additionally, prepping for 6 is underway since it requires PHP 8.1 at a minimum.

With the new Drupal, both the front end and back end will look vastly different. Our primary goal with this update was to make it more user-friendly for those who are unfamiliar with our product. However, we still kept all of the features that allowed us to expand in the future. The new starter kit theme in Drupal 10 will allow developers to change the approach they take to template building, compared to previous versions of Drupal. In addition, updated JavaScript components will replace jQuery UI elements throughout the cms.

The old Seven themes, created in 2009 for Drupal 7 and only slightly refreshed for Drupal 8, were preventing new users from using the system because it looked outdated. In Drupal 10, it will be replaced by the updated Claro theme which meets current standards and takes advantage of all that the latest version of this CMS has to offer. 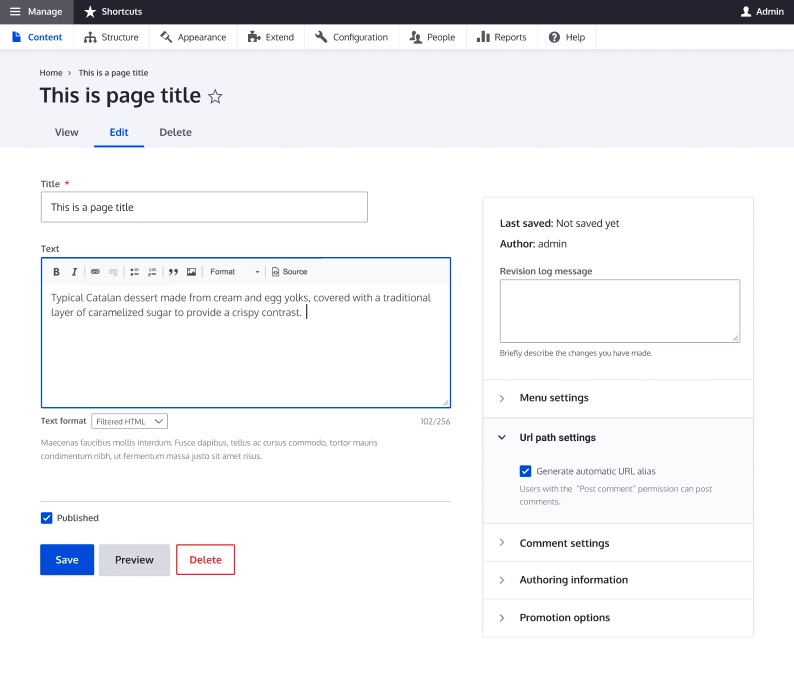 The Olivero theme is the perfect choice for anyone looking for a modern and stylish front end design. Not only will the administration panel have a new look, but users will also be able to see the modern appearance while browsing the page. The Olivero theme has been designed to take full advantage of the new system's capabilities and be compatible with popular functionalities, such as Layout Builder. Additionally,the theme will comply with WCAG AA standards. 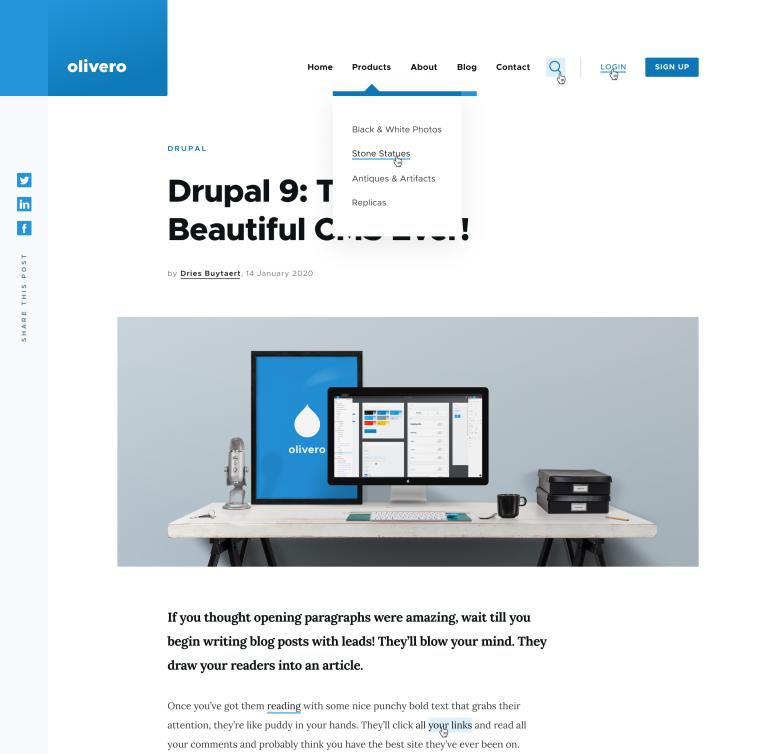 In Drupal 10, the process for building templates will be different than it was in versions 8 and 9. The new starter kit will allow us to generate a clean template that can serve as a foundation for our theme, without needing to extend the base theme. Creating a sub-theme will enable us to avoid inheriting the entire template, which has minimal update options due to maintaining backward compatibility. The concept of sub-theming remains unchanged – we'll still be able to create additional themes that inherit the design elements from our main theme. Generating the theme itself is supposed to be automated and performed by built-in Drupal scripts.

An additional advantage Drupal 10 offers is the new WYSIWYG editor. Although it's an upgrade of CKEditor from version 4 to 5, the current code was written entirely anew. The authors used a novel data model and architecture rather than basing it on the DOM like in version 4.

CKEditor 5 provides an extensive API, allowing for expansion and integration with popular front-end technologies such as Angular and React. Few people know that there is no source editing mode available in WYSIWYG editors. This is because these kinds of editors don't generate HTML code on an ongoing basis. Instead, they only convert the content into code that is readable by browsers when it is saved.

With Drupal 10, you'll be able to update your website menu easily from the administration panel. This is a valuable change, especially for those who use Drupal as a headless CMS. In other words, websites that use front-end frameworks such as React or Angular will be easier to edit and won't require a developer for smaller changes. Additionally, Drupal 10 provides more solutions to make decoupling simpler.

A long-anticipated feature for making Drupal more user-friendly for the average website administrator is automatic updates. The automatic updates will include security and Drupal's core updates. We are planning to expand the feature so that it also supports minor updates and other contributed modules'update processes.

With other popular CMS systems in mind, Drupal 10 will have a convenient module browser right in the administration panel so that you can install whatever tool you need with just a few clicks. Drupal created this additional functionality to make website usage more available for beginners. For example, currently, there are several steps involved in installing modules which can be challenging and some cases (e.g., installation using Composer in the command line) might demand specific user skill sets. The proposed module browser will be equipped with intuitive filtering and modules that are most commonly used by the online community. 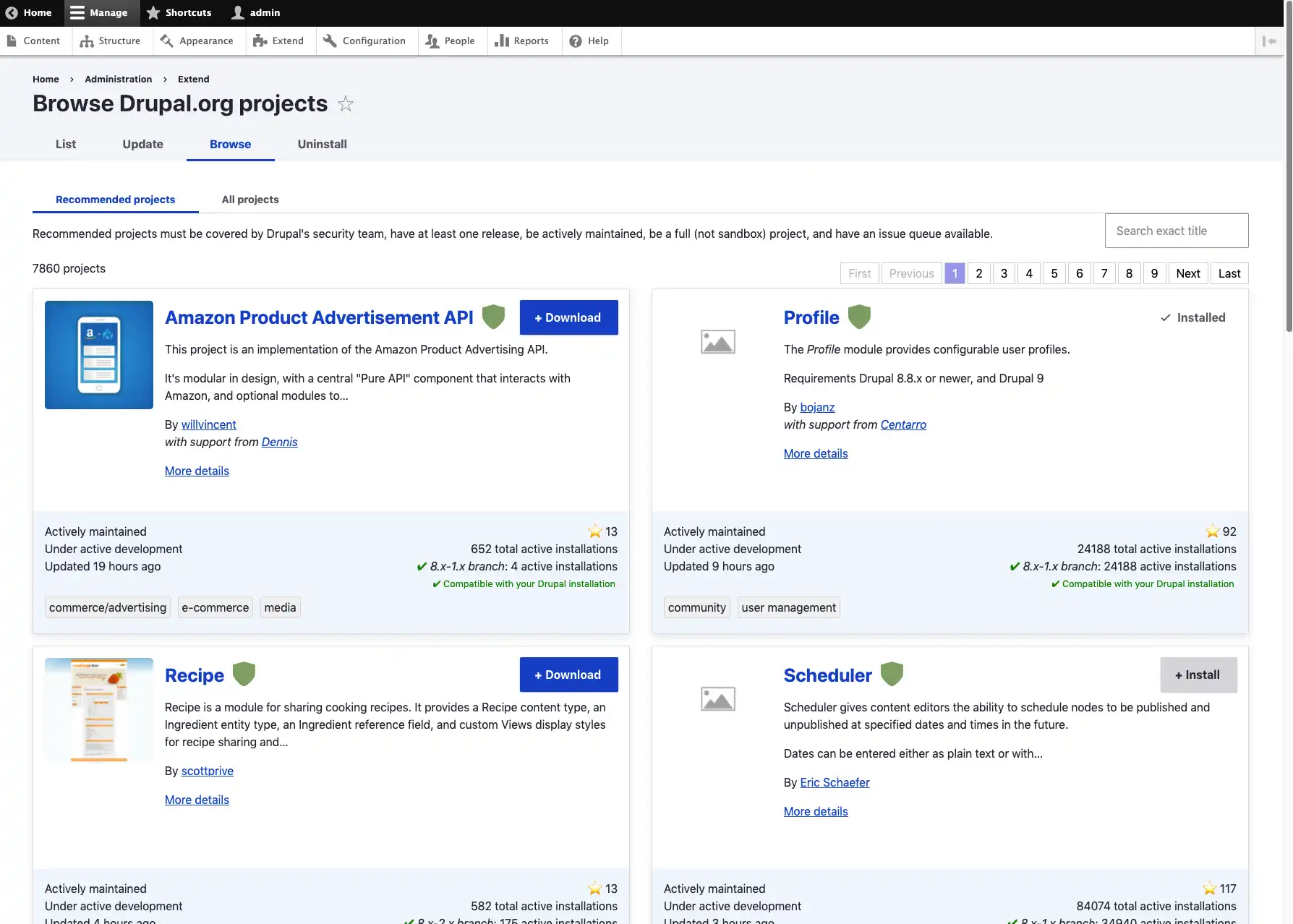 How to get ready to receive the new Drupal 10 version?

Drupal 9 users need to follow updates and check their website with tools like Rector or Upgrade Status. This will help them know how much work is needed to update to Drupal 10, and which modules aren’t compatible with the latest version. To update from version 9 to 10, users will follow the same steps as they would for any minor Drupal core update. The only difference is that this particular updates requires some technical skills. Users can either utilize Composer or do it manually.

As of November 2, 2021, Drupal 8 is no longer supported. Users should update the system to version 9 as soon as possible, and to version 10 after its official release. If you're upgrading from Drupal 8 to 9, the process is straightforward and similar to other software updates. The steps are detailed in the official documentation. You can also use the Upgrade Status module for an extra guide.

If you're using Drupal 7, note that it will only be supported until November 2023. Although Drupal 10 should be released by then and have tools to migrate from version 7, you may now choose to migrate (not update) to version 9 instead. on the day of its release, most modules forversion 9 will also work with Drupal 10. If you're not a qualified specialist, carrying out the migration process is probably going to be too complicated for you.

By updating your website often, you provide yourself with security and the peace of mind that comes with knowing your business can continue even if you switch to a newer version. With the help of our Drupal support team, keeping your website up-to-date is easy.

DrupalPartners with 12+ years of experience has built a strong network of Drupal developers and support teams to ensure you get your site on the best version possible. If you need help with keeping your site up-to-date, our team is available 24/7 to assist you!

To stay ahead of the curve and futureproof your website, be sure to contact us as soon as possible to discuss your Drupal update needs. Whether you need help with migration to version 10, or just want to make sure that your site is on the latest version, our team is here to help!