The importance of drupal maintenance & support for security & stability 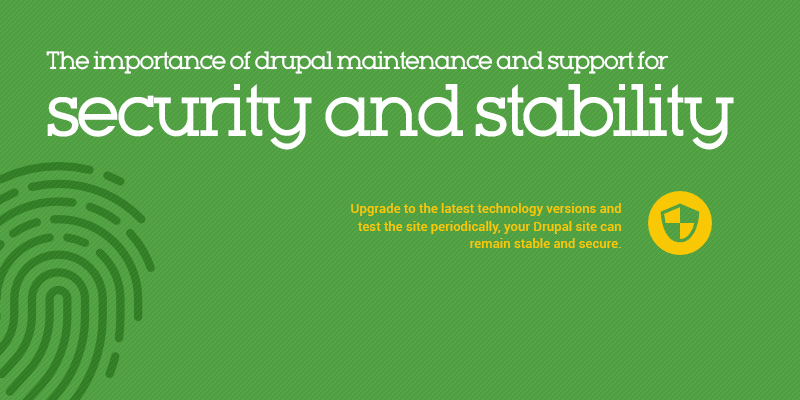 Website management is critical for protecting the site from potential vulnerabilities. The advantage of Drupal site is its open-source platform and availability of community support. Here are vital factors that emphasize the importance of maintaining and supporting Drupal website to ensure security and stability.

A Drupal code consists of several components including core application, base themes, contributed modules, base themes and custom modules and themes as well. A security breach could occur in any of these components. Also, based on past records, sites which are not updated are vulnerable to hacking.

Many sites which have been hacked in the past were running on old codes which means, security will be compromised. Therefore, be vigilant in updating the Drupal community for security issues and seek fixes if available.

Maintaining page load speeds while adding complex technologies is a challenge. Make sure that your newly added codes do not cause performance issues. Get the help of Drupal community who are continually testing and fixing security threats in the code.

When new requirements arise or when features stop working on websites, it's time to upgrade the module or rejig the code. This should be sorted out by Drupal developers promptly to avoid significant issues at a later stage.

Maintaining a website periodically will help avoid completely rebuilding the website where you could end up saving costs. Ensure that incremental security updates which mostly require minor code changes are implemented. At least, ensure a quarterly update.

Testing frequently would prevent site downtime. Introducing new features or installing updates (including security updates) in a particular module can sometimes cause issues with other modules. To solve this issue, read the release notes to know if there are any reported issues in the recent release.

It is recommended to implement the updates (which takes time) at off-hours and put the site under maintenance during that period. Testing the site after updates is the key to fix issues on time and prevent unexpected site downtime.

Drupal sites that depend on third-party integration needs to be updated periodically. For instance, if a Drupal site depends on Google API and when Google updates it to version 2, the support for the previous version may eventually be withdrawn. So, proper maintenance will ensure compatibility.

Regular maintenance and support will help developers make the site easily compatible with new technologies and softwares. For instance, a Drupal site running on PHP 5.6 version may not be easily upgraded to PHP 7.3 version.

Capitalizing on the advantages of Drupal open-source and community support, if you keep your code up-to-date, upgrade to the latest technology versions and test the site periodically, your Drupal site can remain stable and secure.

January 12, 2022
Top 12 Key Indicators Why Google Isn't Indexing Your Website
December 15, 2021
How To Hire A Great Drupal Developer - A Step By Step Guide