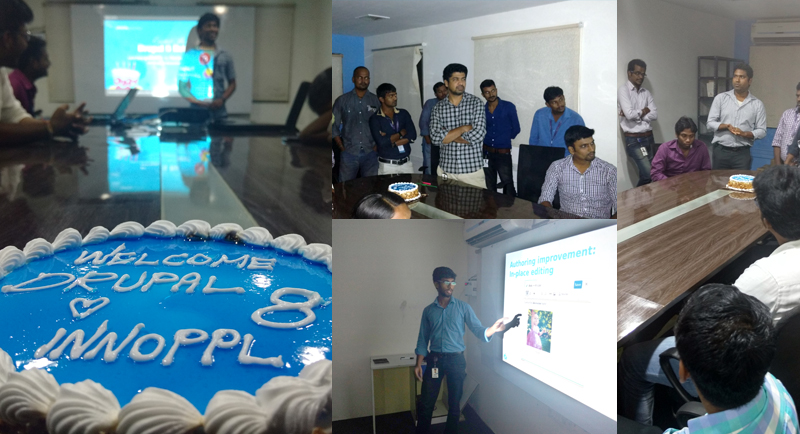 Drupal 8 is here! And, boy, did we celebrate. We would like to start the post with a thank you note to all participants who took the effort to make it to the venue and actively contribute to the Drupal 8 celebration on Nov 19th, 2015!

Why A Celebration You Ask?

Drupal 8 is the collective result of the hard work put in by 3.3k developers, worldwide. Getting the product out has taken a lot of effort and man-hours by enthusiastic Drupalistas from around the world. If this is not a reason enough to celebrate, then we don’t know what is.

We could sense the enthusiasm among all our developers. Hosting a Drupal party was more of a ‘Pride factor’ and it also helped our Drupal developers connect with like-minded Drupal fanatics. The launch of Drupal was indeed a mark of innovation and excellence, which made the Drupal developers from all the city to step out and connect. The agenda for the day:

The Event In A Minute

One of our finest Drupalista conducted a fanastic presentation showing the powerful features of Drupal 8. The presenter conveyed the compelling facts of Drupal 8, holding the audience’s interest for more than an hour.

We deemed this party as a success – We had interactive sessions with various well-thought out questions, making the party an excellent knowledge sharing event. Other highlights include of the event include a yummy nougat cake (Which vanished within seconds) and the interesting people we got to meet. The Drupal 8 release party has opened the doors for plenty of Drupal enthusiasts to connect and learn from each other. Even though Drupal 8 is new, we witnessed the curious developers brainstorming about each and every aspect. The main topic under discussion was the migrating difficulties from Drupal 6/7 to Drupal 8. The shift to the Drupal 8 is inevitable and sooner the Drupal community adapts, the better!

May 16, 2022
How to Install and Use Google Analytics in Drupal: A Comprehensive Guide
May 05, 2022
How Drupal modules increase your website's conversion rate