With Drupal 8, You Need More Than A Drupal Developer 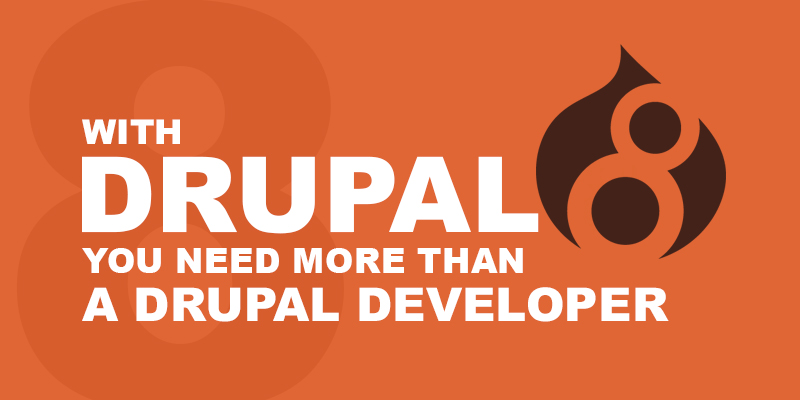 As the countdown for Drupal 8 release gets closer and closer, the excitement in the air is palatable!  Every customer we talk to and all our Drupal developers can’t wait to witness the promised greatness of D8. Many site owners are ready to make the transition as soon as it’s available to the public.

Sadly, though, migration to Drupal 8 isn’t that simple. Most Drupal developers are quite comfortable with the Drupal 7 structure, but we’re hearing that the Drupal 8 structure will be noticeably different. There will be a learning curve, so choosing the right Drupal talent is essential to develop a robust Drupal 8 website.

Thus, if you're building a Drupal 8 site from scratch, you're going to need more than just a Drupal developer - You're going to need a Drupal team.  To help you, we’ve put together a little outline of what we think you'll need to look for in a Drupal 8 Development Team. Having a great team will ensure that, indeed, the Drupal 8 Update is for everyone.

A Site Builder That Is A Drupal 8 Expert

The first person you’ll need on your team is a Drupal 8 Site Builder. A site builder's main goal should be to provide you with a functionality road map for your Drupal developers to use. Site builders won’t need perform the actual coding, but will be key in the “high level” thinking. Thus, it’s mandatory that the site builder already have intense Drupal 8 knowledge. The site builder should already be well-informed on all things Drupal 8, the new modules, features and theming. They should have suggestions on what new modules will work together to build a website that unleashes a company’s true web potential. For example, Drupal 8 boasts to have powerful modules with the incorporation of Object Oriented Programming (OOP) at its core. With concepts like polymorphism, there are numerous opportunities to explore and using super-cool features for powering your website.

A Drupal developer should work in sync with the UI Designer (see below). The designer can create a layout of the site, but making the functionality a reality is the job of the front end designer. Each functionality laid out by the designer should be implemented to perform the said function. Also, a good communication should be established between the front end developer and UI designer to make the UI designer’s vision a reality. In some cases, the UI designer will also be a front end developer. This is a great combo, as the designer knows all about development difficulties and will create a design that will be easy to implement developmentally.

The functionality of your website solely depends on the back-end Drupal developer. He should be an expert in PHP and also other languages to incorporate your website requirements. The back-end developer should also have advanced knowledge in CSS and Javascripts. With the incorporation of Symfony 2, the job of the back end developer is simplified to an extent. The call to web service is made faster and many other functionalities are also made simpler.

It’s mandatory that a back-end developer has some level of knowledge on database language. Also, with the incorporation of OOP, there are loads of powerful modules to have an efficient content editing tool. For example, multi-lingual pages can also be created, powerful content editing tools utilized, and plenty marketing tools can be incorporated with the implementation of Drupal 8. It’s the job of the back-end developer to ensure seamless workflow of all functionalities. They are also required to create automated testing scripts, deployment checklists and other material required for post development tasks.

Drupal websites have the reputation of being boring and bland, but Drupal 8 promises more beautiful themes that are flexible and secured. In Drupal 8, it’s not enough that your UI Designer is an expert in HTML, CSS and Java, but they should have in-depth knowledge in Twig. Twig is a template engine for PHP, which is tweaked to create beautiful themes for Drupal 8. It’s quite popular among most UI designers because its logical syntaxes and many simplified features to create a secure and lovely design.

Note: The UI designer’s job doesn’t end with a beautiful website. Rather, a Drupal UI designer needs to be well-versed in user friendly design. To assist with this, Drupal 8 has over 200 new design features. Your designer should be aware of these functionalities and ensure your website is designed to include all features that benefit the organization’s core process.

Development is just one part on your team. To have a fantastic website, there are other key players needed in creating a robust Drupal 8 site.

A tester is necessary to run through the functionality of the website. She should be educated in all the Drupal 8 documentation available  and able to run the test scripts created by the developer to check all functions of the site work seamlessly.

A good product manager is essential to ensure the entire operation has a definitive workflow, ensuring the project stays in budget and is finished on time.

System admins are required during the entire product life cycle. They set up the work environment required to develop and test the product. Once the product is developed, tested and ready to go, it should be deployed and have a smooth release.

And there you have it - The ideal Drupal 8 Development Team. Indeed, a dynamic team of Drupal 8 developers is required to create a robust and secured website.

With all the roles needed, if you are looking to hire an in-house team, it could be a very expensive process. To help even more, we've put together a guide: How To Hire A Drupal Developer. We take pride in our Drupal developers who have been proactive and started their work on Drupal 8, ensuring a smooth work transition from Drupal 7. If you’re looking for Drupal 8 developers, we are always happy to help.